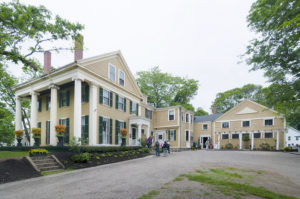 JL Boston hosted the 2016 Designer Show House at the 1854 Nathaniel Allen House in Newton, MA. In celebration of the 45th Anniversary of Show House, the historic home on Webster Street, was beautifully renovated, while still preserving the Greek Revival Style of the home.

The 1854 Nathaniel Allen House was built by education pioneer, Nathaniel Allen, and served as the earliest co-educational school in the country, as well as a stop on the Underground Railroad. Currently, the home is owned by the Newton Cultural Alliance, an organization that supports a variety of cultural events.

Last year’s Show House was a tremendous success, bringing in revenues of over $220,000, which enable the League’s ongoing community impact work. Additionally, NCA benefitted from nearly $300,000 worth of improvements and enhancements on their property, which enabled them to receive a $2,000,000 grant from the city of Newton for further historic preservation and renovations.

Thank you to the following sponsors for supporting the 2016 Show House:

Thank you to the following decorators for your participation in last year’s Show House:

2016 Designer Show House in the News