One of the Junior League of Boston’s signature community placements is Learning Circles, which focuses on developing emotional and physical wellness for pre-adolescent girls. I recently visited the Learning Circles placement at the Boys & Girls Club of Charlestown, which meets every other Tuesday evening. Learning Circles Charlestown serves approximately 25 young girls ages 7-12, with many of them returning to the group multiple years in a row. This year’s 17 Junior League volunteers also include several returning participants.

Co-chairs Kimberly Baker and Meredith O’Toole chose a new theme for the year’s curriculum, “Around the World.” Each week is set within the context of an international destination or event. Baker explains that the Around the World theme enables “creative freedom and different avenues to approach,” so that Learning Circles remains fresh and relevant even for repeat participants. Each session, the girls learn about a new culture and participate in an activity that relates in some way to their growth and wellness. Junior League volunteers take turns planning the curriculum and menu for the planned theme.

During my visit, the girls visited India for Diwali. After a meal of Indian food (dinner is served at every meeting), they learned about Diwali, the Festival of Lights, and decorated small votive candles to gift to someone special at home. 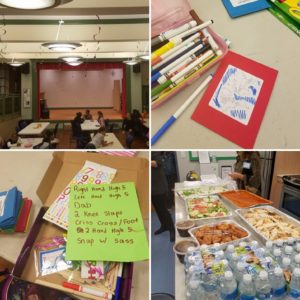 Many of the planned sessions emphasize the girls’ membership in a global community. For example, during their first session on October 3rd, the girls decorated greeting cards to be delivered to people affected by Hurricane Maria in Puerto Rico via the Red Cross. O’Toole points out, “Giving back to the community doesn’t have to be expensive or take a lot of time. You can do it if you’re in 3rd grade.”

In addition to their biweekly meetings, Learning Circles participants enjoy two educational field trips each year. Past destinations have included 5 Wits in Foxboro and kayaking on the Charles.