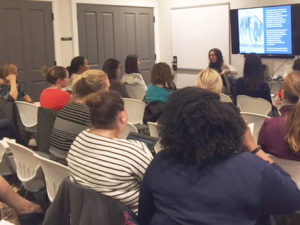 Back in November, a group of League members, including myself, joined Malia Lazu at headquarters for an open and honest discussion about diversity, inclusion, and the true meaning of bias and how it impacts our everyday lives, particularly in the League.

While racism and bias are never easy to talk about, the Junior League of Boston has taken on the tough issues of diversity and inclusion, tackling them through the Diversity and Inclusion Task Force and a series of member trainings and discussions.

Malia is the founder of Urban Labs as well as President of the Epicenter Community, and is no stranger to facing diversity issues and discussing racism in the Boston community.

Through her engaging and open discussion style, we explored who we are as a League and how we want to evolve going forward. Malia helped talk us through what diversity looks like in the context of an organization like ours and what it truly means to diversify.

Some takeaways and points to consider were these key terms and concepts:

I personally gained a lot from this training and while these conversations are never easy, it is the tough conversations that usually benefit everybody the most. While we certainly have a lot more work to do, this was a great start! I highly suggest joining the discussion by attending the second and third trainings on Monday, February 12th and Tuesday, April 24th.