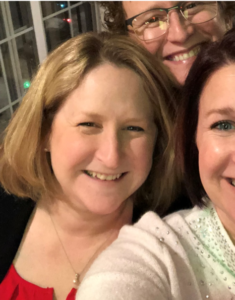 Hometown: Currently resides in Merrimack, NH but grew up in Manchester, NH

Role in JL Boston: President of the Junior League of Boston

Number of Years in Junior League (including other chapters): 17

How did you first get involved with the Junior League?

I first joined in 2000 and I was looking for an opportunity to volunteer that worked with my job, where I didn’t have to take time off during the day or where it wasn’t going to take a ton of time on the weekends and just generally flexible. I read a story in the Boston Globe about the Junior League of Boston and just felt immediately drawn to it. I called the League and asked for more information.

What inspires you about volunteering?

I was a volunteer candy striper in high school. I originally wanted to go to medical school so I volunteered at hospitals to increase my exposure to patients and the medical environment in general. When I went into research after college, I thought about volunteering again. Originally I was drawn back to the hospital setting but I quickly found that the opportunities to volunteer later in the evenings were just few and far between in that setting. That’s when I started looking beyond that. I wanted to feel like I was doing something productive with my time.

What would you tell someone who is thinking about joining the League?

You get so much more out of what you put in. I’ve built friendships and met so many interesting and talented people. And I’ve gained a lot of skills from everything that I’ve put into the League that I’ve been able to directly apply to my career as a research scientist in the pharmaceutical industry. One of the things that drew me to the League was that it is a women’s organization. I’m a big champion of women in general, and success of women in the community and workforce.

What is the most impactful event/experience you’ve had through the League?

Learning from other leaders. The women who have come before me taught me a lot and I’m grateful that I still count many of them as friends. They inspired me to walk the path I did within the League, and I can only hope that my leadership will also inspire others. I am a big fan of mentoring others and of being open to mentorship yourself. I try to practice both, either formally or informally, as often as I can. 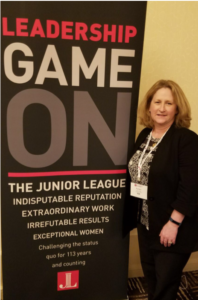 What goals do you have as President this year?

One of my goals is to get people thinking about our commitment to diversity and inclusion a little bit more. I want members to feel respected and like they belong in our League, and I want people we are recruiting to feel like this this is a welcoming organization where they can grow and be supported. We want to be open to all women who value our mission.

We will be moving to a new governance structure next year, so another goal is to make that transition as smooth as possible and anticipate some of the challenges we may face in the near term. We are moving to a system where we have both a strategic board and an executive management team that manages the day-to-day operations of the League. Many members on my board are working to educate people about those governance changes and why they will be good for our League.

What is your favorite Boston activity?

I enjoy the Boston restaurant scene. I like trying new restaurants and hanging out with friends or meeting new people. Part of the fun part of my role as JL Boston President is that I meet with so many people, both inside and outside the League, and it’s fun to explore new restaurants or cafes with them.

What book are you reading?

Daring Greatly: How the Courage to Be Vulnerable Transforms the Way We Live, Love, Parent, and Lead by Brené Brown, and A Fall of Marigolds by Susan Meissner. I love to read and still make time for my neighborhood book club with friends in Merrimack.

Mentorship has been a big part of your development within the League. The League just launched a new mentorship program this year. What advice can you offer women contemplating a leadership role within the League?

I’ve been learning a lot about myself through this experience as President—how I interact with other people, how I think through decisions. It’s not easy and there are a lot of decisions that come your way, and you think, “How am I going to deal with this?” But for me, it’s about listening to other people and gathering information and having the courage to make those decisions. It shouldn’t be scary for people, particularly for the women in the Junior League of Boston. We are a training organization. For me, if I was going to be president of any board or rise to much higher levels in the company where I’m at, this is a safe place for me to develop the skills. This is a training organization and I’m developing myself just like any other member. I try to keep that in mind when I get stressed.

I’ve had many mentors during my League journey and I try to mentor others when I can. I’m very happy that we will launch this pilot mentoring program this year and I encourage members to take advantage of it, if not this year, then perhaps in future years.

Is there anything else you would like our members to know?

We as members can learn a lot from each other. For members who don’t feel like they are engaged, I would invite them to attend a social or training event and reach out to people. The more you are involved, the more you are going to get out of it. That would be my advice for members—reach out and open yourself up to new opportunities and to the challenges different positions can offer in the League. Open yourself up to different people and to the possibility of new mentors and new friendships.