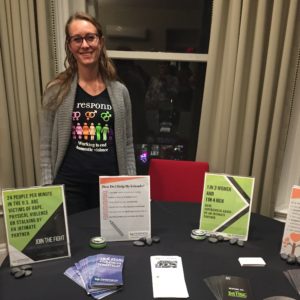 A representative from RESPOND at the DVAM training event.

October is Domestic Violence Awareness month. In light of this, the Junior League of Boston hosted a training on Domestic Violence on Thursday, October 25th. While a difficult topic to cover, the Community Council and Organization hosted an interactive program that taught trainees the importance of understanding the warning signs of domestic violence, explained the broad scope and definition of domestic violence, and brought awareness to the exceptional resources throughout Boston to help those in relationships that qualify as abuse. Speakers at the event include My Life My Choice, Victim Rights Law Center, RESPOND Inc, and the Boston Area Rape Crisis Center.

The event started off with a brief introduction to the resources and groups available to those in abusive relationships. My Life My Choice about the fighting commercial sex trafficking, which often happens in violent relationships. At the local level, this organization provides services to young ladies who have been exploited. The nonprofit organization also assists anyone who is at risk for sexual exploitation.

RESPOND Inc is New England’s first domestic violence agency and the second oldest one in the nation. It began in the 1970s in Somerville, MA as a grassroots effort to support victims of domestic violence by opening homes as a safe haven for women fleeing abuse. The organization partners with individuals and families through prevention, interventions and education services that promote safe, healthy relationships. 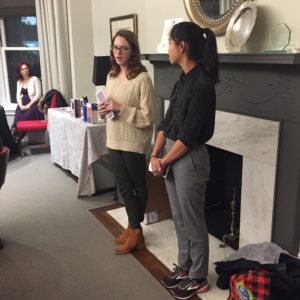 In addition to providing resources and information the program had role play activities – allowing members to experience what it is like to flee their apartment or “safe space” because of an abuser. The room was set up to look like an apartment with different items including: kids toys, birth certificates, important documents, food, family photos and more. Members who participated had one minute to grab things that they think they would need if they had to leave their home quickly. This was an interesting exercise that was somewhat stress inducing to mimic the situation that a victim would be in.

The program informed participants of the prevalence of domestic abuse in society. One in three women have experience abuse by an intimate partner. If you, or a loved one, are in an abusive relationship remember in a healthy relationship: you can speak up, respect each other’s opinions and feelings, spend time with other friends and argue but compromise. Support you friends, or anyone you think is having issues in their relationship, and help them if you know something is wrong.