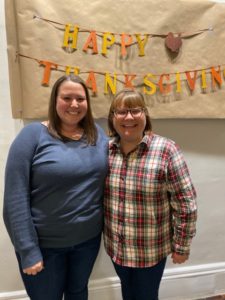 Focus on Mentorship with Connie Henderson and Courtney Astemborski

Connie Henderson (Transfer Manager and VP-Elect of Membership) and Courtney Astemborski (Transfer Manager-Elect) completed the first Junior League of Boston Mentorship program in 2017. Connie was Courtney’s mentor. They loved the program and a great friendship has blossomed from their mentorship relationship. Below is an edited Q&A with Connie and Courtney about what mentorship means to them and tips on how to have a successful mentor-mentee relationship.

Q: What does mentorship mean to you?

(Connie) When I think of mentorship I think of someone in your life (personal, professional in any capacity) who is that person who you go to for advice, have questions or even if it’s someone you vent to and you just trust them. They are people I know I can call upon. They are reliable. They are always open to helping and answering any questions I have. They have an open ear for me. They believe in me too. It’s hard to draw the line between a mentor and a friend sometimes.

(Courtney) A mentor is someone you look to be a cheerleader and someone that can advocate for you and help guide you when you don’t know what to do. They are a person to get advice from.

Q: Had either of you had a mentor or been a mentee?

(Courtney) I had done formal things in college with my major and I’ve always feel like I’m the mentee.

(Connie) I’ve definitely had a lot of mentors at work and otherwise. When I was in the Junior League of Charlotte they had a mentorship program and signed up for that.

Q: What was your first impression of each other?

(Connie) We first met at Coppersmith. We were there for two to three hours. My first impression was that Courtney was really bubbly, super excited and really into it.

(Courtney) We met for brunch during the Super Bowl. I had just gone skiing the day before by myself. I remember just telling Connie about being proud of going skiing by myself. We just spent a lot of time catching up. I enjoyed hearing about Connie’s experience in the League. We had similar interests from the beginning.

Q: Did you meet more than once per month?

(Courtney) We did pretty good on doing once per month.

(Connie) At first it was just once a month and then it turned into more of a friendship. Hey, let’s go grab dinner. Let’s do something before the GMM. That type of thing.

Q: As a mentor and as a mentee, what did you hope to get out of the program? Why did you sign up?

(Courtney) I signed up to learn more about what opportunities were out there and see what I’d be interested in that I didn’t know about. When I first came to League events I’d be like, there are a lot of opportunities, but I have no experience. I wanted to get to know someone who might know that stuff and give some advice.

(Connie) Jen Pelton and Lynn Huckabee encouraged me to apply for the program. I feel like I know a lot about the league and I am pretty involved. I wanted to help somebody who was looking for a League buddy.

Q: What inspires you to build mentorship or League communities?

(Connie) I didn’t really have that when I was in my former League when I was in Charlotte. I love the League and I love what I get out of it so I just wanted to share that. I want everyone to enjoy their League experience as much as I do. For me, I want to go out and help people have good experiences.

(Courtney) When I joined the League I wanted to get to know more about where I was living. I didn’t grow up in the area. I have friends in the area but some are married, some are just acquaintances that get together every couple of months. I found the Junior League. My mom was in it so I knew of the League but didn’t know anyone here in Boston. It helped me begin my life in Boston. I have seen how important it is stay connected with the community but also with people in the area. It’s hard to make friends as adults, so I was like, how do you do it?

Q: What advice do you have for 2020 Mentorship program participants?

(Courtney) I think the biggest thing is, do what works for you guys. Connie and I weren’t the best rule followers of what was expected of us each month. But we were good at getting together and talking about what was important for us. We didn’t follow much structure besides the encouragement of getting together once per month. That helped give us a timetable. What worked best for us was eating and going to get food.

(Connie) What I appreciate the most about Courtney being my mentee is she is that person that always shows up. That is a big thing. You get out of the League what you are going to put into it. You have to show up. You have to sign up for stuff. You have to be active in it in order to get a really great experience. That was really important to me and I wanted someone who shared that same view and was committed to showing up.

(Courtney) I was looking for someone that had an interest in leadership. It kind of naturally happened. When we first met I was doing community stuff. I mentioned I was interested in new member advisor and she encouraged me to go for that. When I went through new member advisor, which is great, Connie also encouraged me to join the transfer committee. It is similar in that it has that social aspect. As a result, we’ve been able to now move into a literal leadership path for us.

(Connie) You will miss 100% of the shots you don’t take. Just try it. What is the worse that is going to happen? I really lucked out with mine. Most likely your mentor will know a lot of people and will be able to introduce you. If you are looking to meet people, most likely she is going to know a lot of people in the League. It’s just another door for you to make new connections.

(Courtney) You get to meet new people. There are people I got to know just because of attending some Mentorship socials.